I had the honor to receive an advanced reader’s copy (ARC) of Black Sun by Rebecca Roanhorse, a NYTimes Bestseller and a Nebula, Hugo and Locus Award-winning speculative fiction writer and the recipient of the 2018 Astounding (formerly Campbell) Award for Best New Writer. She’s also Black, Indigenous, and a Diné-in-law. Black Sun is a fictional fantasy book that was inspired by the civilizations of Pre-Columbian “Americas”. The book is a woven tale of celestial prophecies, political intrigue, and forbidden magic. Below is the official description of the book;

In the holy city of Tova, the winter solstice is usually a time for celebration and renewal, but this year it coincides with a solar eclipse, a rare celestial event proscribed by the Sun Priest as an unbalancing of the world.

Meanwhile, a ship launches from a distant city bound for Tova and set to arrive on the solstice. The captain of the ship, Xiala, is a disgraced Teek whose song can calm the waters around her as easily as it can warp a man’s mind. Her ship carries one passenger. Described as harmless, the passenger, Serapio, is a young man, blind, scarred, and cloaked in destiny. As Xiala well knows, when a man is described as harmless, he usually ends up being a villain.

Crafted with unforgettable characters, Rebecca Roanhorse has created an epic adventure exploring the decadence of power amidst the weight of history and the struggle of individuals swimming against the confines of society and their broken pasts in the most original series debut of the decade.

Over the years, I have grown to love the books that Roanhorse has written, and so far, this one is my favorite (sorry Maggie from Trail of Lightning). It is my favorite because Black Sun features Indigenous characters who are powerful and iconic. Roanhorse offers us a world that can be simultaneously before and after colonization with characters known by their actions and their relationships to others. In this imagined world, gender and sexuality are not questioned or tabooed. Rather, the world relies on the characters to grow and change as they navigate the shifting politics and nefarious plots during a time of celebration and renewal. Each character must decide to save the world or themselves.

I am someone who always desires and demands for more complex and diverse Indigenous representation, especially representation that celebrates Indigenous Queer and/or Trans individuals, and Roanhorse includes us. She includes a generation of us, who, just like Naranpa, are constantly surviving in a colonized world that hopes to remove us and take away our power.

“I’ll do what I’ve always done.” She glanced briefly at Zataya. “Survive.”

In addition, this book is so relatable for so many other marginalized peoples who are never the main character, who are never the heroes, never the villains, never included in these stories of fantasy, but for once we are, and that is truly amazing.

There is so much I want to share, yet I cannot reveal all. Only to offer to you that the lives of Xiala, Serapio, Okoa, and Naranpa are just beginning as Roanhorse continues to craft a world, both familiar and new for us. 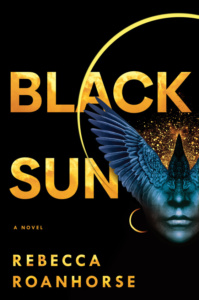 Black Sun by Rebecca Roanhorse is available for pre-order. The book officially releases on October 13, 2020 (a day after Indigenous Peoples’ Day!). More information on purchase links, the book, and other publisher-related information can be found here.

Thank you so much to Hear Our Voices Book Tours and the publisher for the opportunity to read an ARC.

This site uses Akismet to reduce spam. Learn how your comment data is processed.